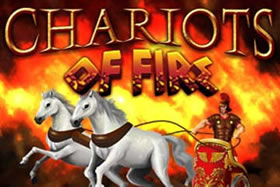 Here’s your chance to drive one of the most fearful military vehicles ever developed—the Roman chariot! The ground shakes in Chariots of Fire as the wild symbols expand on the 1st, 3rd, and 5th reels and look like spears ablaze! When you get free spins, the soldier can activate the Roman Victory bonus in which two reels can go fully wild! Roman chariots were the most feared military hardware in the ancient world. Chariots of Fire Slot machine offers a high-energy gaming experience where you’ll encounter the symbols of Roman valor and bravery.

The tale of the Roman conquest of large regions Europe, Asia and Africa is known as one of history’s biggest wonders. The strategy of the Roman army is studied by students of the military till today Now you will feel the excitement and anticipation of this historical episode as you spin the reels and line up game symbols on the 25-payline casino adventure.

The Chariots of Fire Slots review gives you an overview of the game. You’ll get a feel for the game images, the payline options and the bonus possibilities that give you the chance to achieve high game wins with your game spins. You can play Chariots of Fire slots on your PC or mobile device at your leisure. Just sign into the casino, open your account and start playing.

The casino offers a Free Play Mode where you can play for as long as you want for free. When you’re ready to play for real money prizes, enable your selected paylines and compete for cash prizes. This slots jackpot totals an amazing 800 coins and boasts an amazing 94.89 RTP%, making it one of the casino’s most generous payout games.

The heady days of the Roman Empire meet 21st century technology in the fun-filled Chariots of Fire slots. The game conjures up the days when Roman legions invaded and conquered North Africa, Southern Europe and parts of Asia. Thundering chariots terrorized civilians and enemy soldiers alike which gave the Romans the advantage that allowed them to conquer millions of acres and hundreds of thousands of subjects.

Game symbols include images of the Emperor, a White Stallion, a Roman army insignia, a haughty Noble Lady, a Roman Soldier, a shield, a cavalry helmet and traditional slots letter and number symbols.

Every time that you spin the reels you’ll be able to match symbols on the paylines. If you match 3 symbols on a payline you’ll achieve a win. If you enabled that payline with a bet before the spin the win will trigger a payout. You can activate as few or as many of the paylines as you wish but remember — only those paylines on which you’ve deposited a bet will deliver a payout on a winning spin.

Expanding Wilds on reels one, three and five, during regular game spins, expand to cover all of the reels as flaming spears. They then complete more paylines to create more wins.

You can play Chariots of Fire Slots on your PC or mobile device. The game is mobile-enabled so all of the tools and the images have been adapted to fit the mobile screen. Regardless of your preferred gaming platform you’ll enjoy the thrills of slots competition as you complete paylines, vie for the free spins rounds and play the bonus game to boost your payouts.

You can boost your payouts even further via the casino’s promotional give-aways. The casino gives players extra bonuses that allow the gamers to multiply their wins with casino gifts. These include Welcome Bonuses for new players, Loyalty and Rewards points for loyal veteran gamers, birthday bonuses, refer-a-friend bonuses, daily specials and more.

You’ll enjoy a high-energy casino adventure of fun, excitement and real money prizes when you play the Chariot of Fire slot.