The saga of Red Rock Casino, Station Casinos, and their refusal to pay out a Bad Beat jackpot seems to have come to an end, happily for the poker players involved and very sadly and ignominiously for Red Rock Casino. Two of the lessons we can all learn is that regulation of casinos is vitally important in order to maintain the overall integrity of gambling and that there are many advantages to playing at an online casino rather than at a land based casino like Red Rock.

The promotion that got it all started was called Bad Beat Jackpot. It stipulated that in the Texas Hold’em game being played live at the casino, a full house of three aces and two jacks was considered the “qualifying” hand. If any player beat that hand, he or she would win a large jackpot in addition to the pot. The promotion also stipulated that everyone then present at any casino in the Station Casinos group would win a prize. 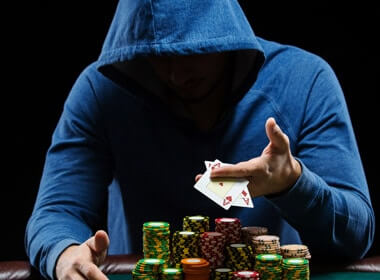 An 83 year old player, Avi Shamir, had a straight flush which guaranteed that he would win the Bad Beat Jackpot. There was one slight problem for Mr. Shamir: another player at the same table had a better straight flush than he had! Needless to say, the odds against anyone beating the qualifying hand are very high against it happening. For two players on the same hand to do so is astronomically unlikely. Yet that is what happened.

Simply put, the casino refused to pay the jackpot to the two lucky poker players.

Shock soon turned to anger as it became clear that Station Casinos was adamant that the early hand declaration voided the promotion.

Some of the players involved took the case to the Nevada Gaming Control Board. It took the Board only a few months to hear both sides of the story and to decide in favor of the plaintiffs. The casino appealed but the entire process was concluded in only seven months. That alone is very good news for the gaming industry as a whole since most impartial observers saw the casino’s action as totally unjustified and that it gave the entire industry a bad name.

An ancillary aspect of the procedure through the Gaming Board is that, had the players been compelled to sue the casino in court, their legal fees would probably have exceeded the award they received and the case might have taken years to reach a final conclusion only after all the appeals had been heard.

The very existence of the Gaming Board and the recognition that its decision would be final and would prevail made a years long court debacle take only seven months.

Station Casinos still had an ace in the hole so to speak. They simply removed the Bad Beat Jackpot promotion from their casino. Early reports are that even here the casino’s management seems unaware of who their customers are and what keeps people coming back.

Apparently, the Bad Beat Jackpot promotion was one of the best promotions the casino had ever run even though they eventually lost to a very bad beat. By removing the promotion entirely, the casino has been experiencing bad drop offs in player attendance.

The casino is losing more money by not running the promotion than by paying out the winnings of lucky players who would likely have come back the next day.

The land based casino industry is trying to isolate Red Rock and Station Casinos. So, when a lucky player won a Bad Beat jackpot in Detroit and won $1,000,000, the casino splashed the news all over the casino gaming world.

There are many advantages to playing online rather than at a land based casino. We certainly do not deny that playing against real people is a challenge and adds something to the excitement of the game. At an online casino, the Random Number Generator decides every hand or every spin. The only way in practice that a player can have a strong disagreement with the casino is if a glitch occurs in the internet.

Such a glitch can occur from the player’s server or infrastructure provider. It can also occur if there is a local power outage. These problems do occur but the problem that happened on that sad summer day at Red Rock could never happen online.

The good news is that after the Gaming Board made its ruling, Red Rock did in fact pay out the money it owed to Messrs. Shamir and Schleter. The jackpot will be divvied up as follows; about 62,000 to Mr. Shamir, 25% of the remainder to Mr. Schleter, and the other 80 patrons are entitled to divide the remaining 25%.

Reports did not say how the casino knows the names of all the other patrons in the casino at the time.