Most of our readers like to play online casino games. The most popular games are slots, blackjack, and video poker. So, it might seem odd that Slots Play Casinos would offer an article on how to play poker played with real opponents!

We understand that part of our task is to serve the casino gaming public in full. So, here we will take a close look at poker, both in its online version and in its land-based poker room version. 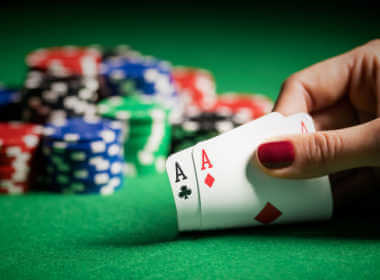 There are Many Variations of Poker

People who play poker with friends will be acquainted with quite a large group of poker variations. The most common are draw poker and stud poker. Even in stud we have five-card stud and seven-card stud.

Now, add a wild card or two and you have a vastly different game than simple stud!

How Many Poker Variations Should a New Player Play?

The first point we would like to make is that when you play with friends, it’s alright to play a lot of variations. However, when you enter the world of poker against real opponents who you do not know, we suggest that you stick with one variation of poker alone until you feel that your mastery of that variation permits you to venture into the world of a different variation.

That never happens at an online poker room.

Is Poker Really that Complicated?

Poker is even more complicated than we have alluded to so far. There are so many things to think about!

Everything involved in poker is contained in these cards; their actual value in the hand and their potential value. A lowly deuce may be worth very little in the overwhelming majority of hands but it could be worth a great deal in some select hands.

Poker Math is All about the 52 Cards

As daunting as poker math is to many players, the odds of getting the card you need is always a function of the 52 cards minus the cards you can see.

If you are trying to figure out pot odds, all you need to do is add the money in the pot and divide by the bet you have to make. This calculation can be rounded off; you don’t have to go to several decimal points to know enough to determine if you should bet or fold.

A Renaissance Man or Woman is Rare in Poker

The term Renaissance Man was coined to refer to men who had developed expertise in many fields. Nowadays we also include women in this calculation. In poker, the player who excels at many forms of poker is rare. It is best to see oneself as a Jack (or Jaqueline) of a very short list of trades, or poker variations.

The Hierarchy of Hands is Paramount in Poker

Making a reference to the hierarchy of hands in poker might seem too basic to even talk about. But we also need to know how often a hand might come up.

We learned about this is video poker where if you are lucky enough to have four to a straight flush, the best strategy is to break a winning pair and go for the straight flush.

Position Plays a Major Role in All Forms of Poker

When we are playing with friends, we don’t feel the significance of position. None of our friends is so expert in poker as to be able to take advantage of a very optimistic bet by another player in an early position.

However, if you play against people you don’t know, any bet an opponent makes in an early position is filled with uncertainty. It might be a foolish bet in a losing situation or it might be a bluff.

Everyone Starts off Equal When Everyone Antes to Start the Game

In this scenario, it matters less the size of the ante than the fact that all players start the hand on an equal footing except for the matter of position. If the ante is too big for your bankroll, that alone is a sign that you need to find a game with a smaller ante.

A lot of new poker players will call a bet that was made after they checked in early position because they want to see the next card to determine if they have any chance of winning the pot. This is a mistake that costs players money in the long run, but it is a lot less harmful than betting in an early position with a weak hand.

Early position simply means that, if you do bet, all of the other players bet after you and therefore may be able to telegraph a hand that you can’t beat. In an ante hand, it is fine to check but if someone does bet, it is usually the best course of action to fold and forfeit the ante.

The Blinds Affect Strategy on Every Hand

In Texas Hold’em, the blinds bet last before the flop. The blinds are the only players with money at stake in the hand. Therefore, it is very important for all players and especially new players to become comfortable folding at least 70% of all hands.

This is especially true of the hands when you are in an early position. There is simply too much uncertainty with all of the other players yet to bet to risk calling the big blind with anything but a strong hand.

This is the last item we will talk about in this very scratch-the-surface article. Reading an opponent means paying close attention on every hand to see how the others play the hand.

New players don’t yet know how or when this store of knowledge will become useful but the simple act of creating such a database in your head is a very important part of becoming a good poker player.

Learning how to read an opponent takes a long time to perfect. If you want to become a truly proficient poker player, you will make the study of human nature and human behavior a top priority.

We talk about the calming effect of the games of chance such as slots and the far more cerebral challenges inherent in the games of skill such as blackjack, video poker, and, as this article attests, poker against real opponents.