Everyone is talking seemingly non-stop about the imminent revolution in American gambling habits if the Supreme Court reverses the Professional and Amateur Sports Protection Act (PASPA) that was made the law of the land in 1992. The law made it illegal to bet on sports except for in the four states – Nevada, Montana, Oregon, and Delaware – where some form of sports betting already existed legally. The revolution is not just that sports betting will make major inroads in the frequency with which players play online casino games. The revolution is that many people who never gambled at all will become enamored with sports betting.

The news is filled with reports of how sports and states are getting ready for the much-anticipated go ahead from the Supreme Court. 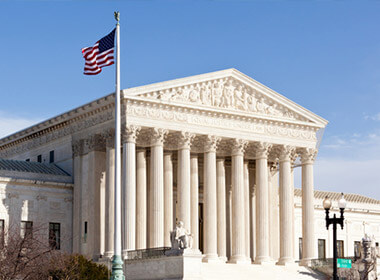 Officials in this state believe that the Supreme Court will issue its ruling by the end of this month (April). Last year the state legislature passed a law allowing sports betting at the state’s four land based casinos. Online casinos are still excluded at this time.

The state has established a three month time frame for the full implementation of sports betting but the timeline could be delayed if the state legislature convenes to alter the law it passed last year. Major League Baseball and the NBA want the state to contribute 1% of all sports betting revenues to the leagues.

It was this state that started the entire process that has everyone waiting on the nine robed judges’ decision. PASPA was in effect throughout the US until New Jersey passed a law allowing sports betting. That law was struck down in the courts and the case has finally reached the Supreme Court.

New Jersey is busty getting ready for the start of legal sports betting. Some observers believe that the Supreme Court may decide narrowly, meaning that it will decide in favor of New Jersey but leave PASPA intact for all other excluded states.

MLB and the NBA are also still anxious to a) get some of the sports betting revenue for themselves and b) to maintain the integrity of their respective sports. When New Jersey passed its law in 2012, all major and collegiate sports leagues and authorities sued the state but now they are all aware that New Jersey will probably win in the Supreme Court so they are trying to get the best deal thy can from the state and all other states that are planning on implementing sports betting in their jurisdictions.

This is a Canadian gambling site that announced this month that it was buying Sky Betting and Gaming for $4.7 billion. Stars Group made the decision to make the deal because it, too, expects sports betting in the United States to become massively big. The deal is something of a gamble as the Supreme Court has not yet made its ruling public.

This cash-strapped state is still waiting for the Supreme Court’s decision to get the legislature working on a law. A former state legislator, and now a lobbyist for a Chicago-area racetrack, says that there is a huge amount of illegal sports betting going on in the state. He also cited the existence of offshore bank accounts from which many sports bettors make their bets. As this is all illegal and the offshore accounts are often used to avoid taxes, he believes that at least for the purposes of sports betting that money would come back to the state in order to make fully legal sports bets.

The irony is that the state desperately needs the revenues sports betting would generate in a sports crazy state with a population in excess of ten million people. Thus, it is baffling to many that the state legislature has not yet gotten started on implementing a sports betting protocol should the Court rule that PASPA was unconstitutional.

These sites have been in the news often in the last few years because some jurisdictions are trying to have fantasy sports as games of chance. While it is true that there is a buy-in fee for fantasy sports players, the “games” and outcomes are all based on real-life actions of teams and athletes. The actual performances of athletes are translated into game results for the fantasy sports leagues. Therefore, fantasy sports fall into the category of games of skill which are not considered gambling.

The case before the Supreme Court puts fantasy leagues in a quandary because they have long been saying the fees they charge are not gambling yet they also want to cash in on the financial bonanza sports betting is expected to be.

Forbes magazine recently ran an article about how slowly players unions are responding to the impending change in how sports are perceived in the US. Most observers expect the players unions to issue statements immediately after the Supreme Court rules but no one knows yet what the unions might say.

The problems posed by legal sports betting are basically two-fold. First, the integrity of the games would immediately be challenged if there was any perception that a player, manager, or coach had made decisions that were ostensibly illogical and affected millions of dollars in bets.

Many coaching decisions are criticized after the fact. When a coach or manager makes a controversial decision, will there be immediate speculation that he was influenced by the “line”? The same goes for players who can affect the outcome of a game in innumerable ways most of which are not easily considered to be purposeful.

The second problem is the possibility that a player making “only” a few hundred thousand dollars per year might be willing to take money to “throw” a game or even to affect the spread in a game.

These are just a few of the items that came to our attention in the past week as everyone continues to anticipate and plan for the inevitable upheaval whichever way the Supreme Court decides.